Wayne has been active in our community for over twelve years - fund raising for charities and as a school governor for a variety of Rugby schools over the last ten years including Henry Hinde Infants & Junior, Avon Valley and Rugby Free Secondary.

More recently he has been offering his free time as an NHS Responder providing support for people living alone or in self-isolation. He trained as a volunteer vaccinator with St John Ambulance supporting the COVID-19 vaccination programme.

He’s self-employed and in his professional life he directs communications and acts as the public voice for numerous organisations across the country that need to engage with their staff and local people - from NHS Hospitals to Housing Associations, Local Authorities and charities, Universities and energy companies.

He lives in Rugby with his wife and two teenage daughters who both attend local secondary schools.

He’s been a Scout leader for over 25 years, plays lots of squash, enjoys football, rugby, good food, going to the cinema with the family, comedy clubs with friends and can sometimes be found in one of his favourite Rugby pubs – the Merchants Inn, reading a good book – as a ‘pitstop’ while walking the dog!

He wants better services for residents, while recognising that there distinctly different priorities throughout the Ward.

Through his current volunteering he has a particular focus upon children’s community services, disability access and environmental challenges.

Wayne is a member of the Planning Committee. 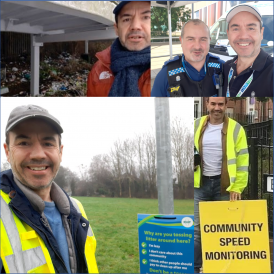