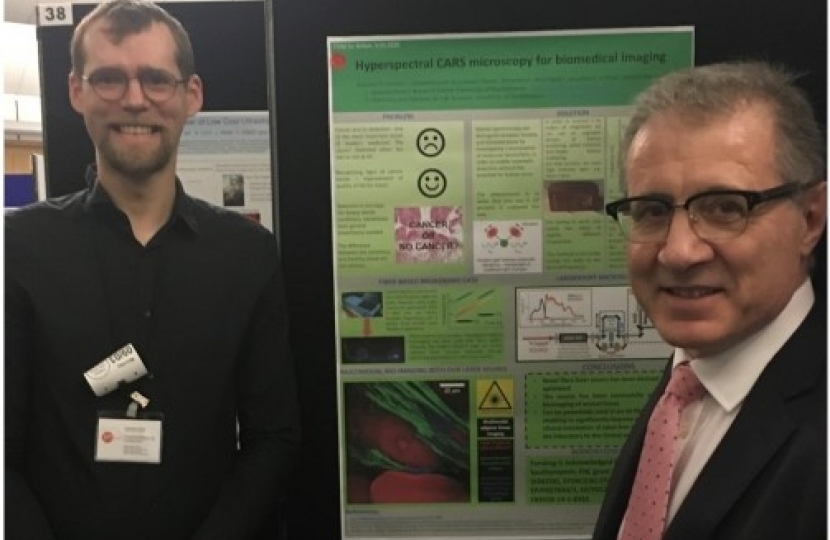 Local MP Mark Pawsey met with Krzysztof during the STEM (Science, Technology, Engineering and Mathematics) for Britain exhibition in Parliament, where scientists, engineers and mathematicians show posters setting out their research. Much of this research exists at the cutting edge of current scientific research and Krzysztof’s work on early cancer detection is no exception.

Krzysztof’s research involves using lasers to detect cancerous tissue at an earlier stage than existing medical techniques. The technology would also allow cancers to be detected without the need for an invasive biopsy in some cases, making the process quicker and safer for patients. The research overview which Krzysztof was showing in Parliament also forms the basis of his PhD project and is an extension of his passion for lasers which he continues to fulfil in Rugby business SPI Lasers.

After speaking to Krzysztof, Mark gave the project his full support and commented: “I was very interested to find out about the research that Krzysztof has done for his PhD. One of the most important things we can do to tackle cancer is improve the early diagnosis, as this makes treatment much more successful. I hope that Krzysztof continues this work and that this can contribute to lifesaving treatment for those with cancer.”

Mark continued: “STEM for Britain is a great opportunity to showcase some of the incredible work taking place up and down the country, some of which will undoubtedly revolutionise the future. It was fascinating to hear from Krzysztof about the medical applications of lasers and how his research might develop new techniques which, ultimately, could save lives.”

Krzysztof added: “I have always considered, that the development of new technologies needs to be accompanied by actions raising the awareness of that research within the wider public. I am therefore very happy that I was able to fulfil that need through participation of STEM in Britain, and to talk about my work with my local MP’’