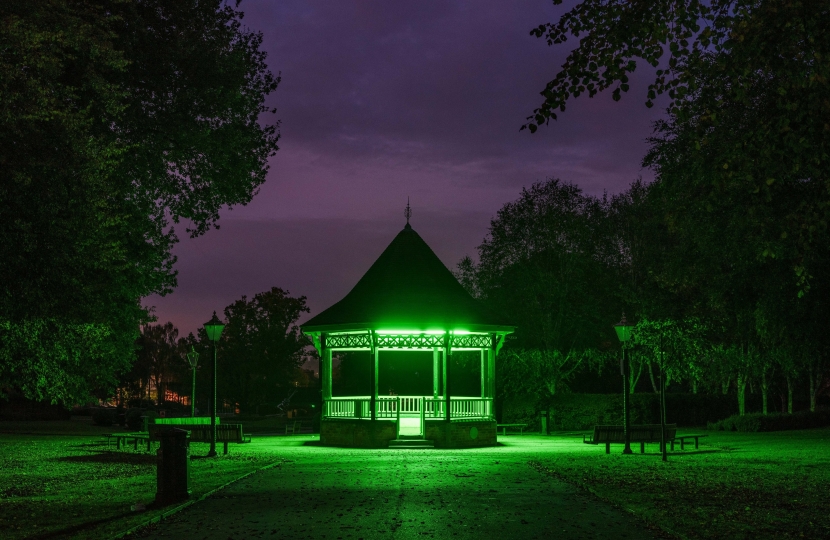 In a council press release today, the council announced that the bandstand at Rugby's Caldecott Park will be lit up in green this week to celebrate its success in the Green Flag Awards, winning 13 years in a row.

Cllr Howard Roberts, Rugby Borough Councils' Conservative portfolio holder for environment and public realm, said in the same press release that the council was delighted to also support Go Green For Parks and celebrate the borough's Green Flag success. Cllr. Howard Roberts said, "We're proud of our track record of creating and maintaining quality parks and green spaces across the borough, giving our residents safe environments to exercise in, explore and enjoy"

Newbold's Centenary Park was awarded a Green Flag for a fifth year. Millennium Green and New Bilton's Gladstone Green both retained Green Flags for a fourth year, together with the grounds at Rainsbrook Crematorium.

Cllr Roberts, "The important role our parks play has been brought into focus during the lockdown restrictions, and our success in the Green Flag Awards provides a fitting tribute to the hard work of our parks and grounds team, and volunteers and residents, who help maintain our green spaces all year round."

Photo: Caldecott Park bandstand glows in green to celebrate the success in gaining five awards in the Green Flag Awards.

Today we have published our Covid-19 UK Vaccines Delivery Plan, setting out how we plan to deliver the biggest vaccination programme in British history, to protect all those who need it most as quickly as possible.