Flying the LGBT flag with Pride 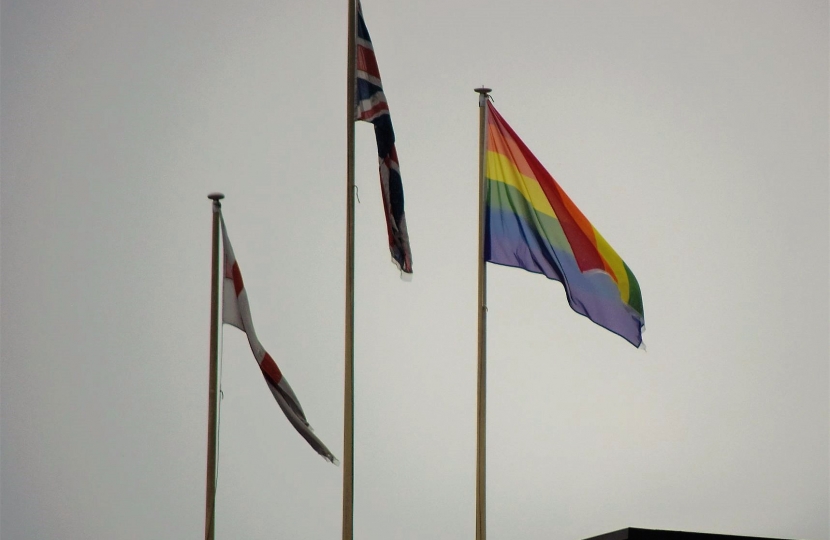 Cllr. Michael Stokes, Leader of Rugby Borough Council said, "It is so disappointing that Rugby Labour have stooped to an all time low and are attempting to score political points from individuals that are being discriminated against in our Borough. This has caused concern from residents that Rugby Borough Council has not responded to the issues raised, and this is simply not true."

Cllr. Stokes continued, "A recent report by Warwickshire Pride, which was commissioned by Rugby Borough Council, has identified issues where the LGBT+ Community has suffered an unacceptable level of prejudice in Rugby Borough. Furthermore, Warwickshire Pride have confirmed that Rugby is the only local authority in Warwickshire to commission this kind of report and tackle these issues ‘head on’. Immediately, council officers took action and met with senior officer and HR representatives as well as the Equality & Diversity Panel which met before the budget to discuss the issues and adopt an action plan proposed by Warwickshire Pride and EQUIP. An initial operational budget of £5,000 was set aside to meet any costs of the action plan.This Tuesday 26th February, Rugby Borough Council set its budget for the coming year. The Rugby Labour Party issued a budget amendment at 5:14pm with the meeting starting at 7pm, with the following TWO items (and ONLY these two items);

(a) £16,000 to be set aside at £1,000 per ward. These will be allocated to ward level schemes and works that will include tackling graffiti hotspots, fly tipping and other localised issues that need small scale but priority intervention. This is a pilot scheme and will be evaluated to ensure its effectiveness and impact. This cost will be met from 2018/19 general fund revenue underspends.

During the debate, Labour explained that they thought the lanyards would set a ‘good example’ to council officers and the Advocacy Scheme would ‘give more training to council officers’. There was no discussion around tackling the issues identified in our communities by Warwickshire Pride. There had been no discussion with key officers around these measures, how effective they would be and the plan already adopted."

"Following officers advice, I explained in Council that we would follow the professional advice and guidance offered by Warwickshire Pride and EQUIP in tackling these issues as a matter of urgency. Labour acknowledged there had been no discussion with key officers, and this was un-costed and were unaware of the meeting which had taken place as no questions were asked of the relevant officers."

The leader of the Council concluded, "This is not a political issue – as Leader of Rugby Borough Council I clearly stated and repeat my comments that ‘even one case of discrimination is one too many and we must do everything in our power to identify the issues and work with our expert partners to resolve them."

After the meeting, the Labour Party then issued a separate press release which bears no relation to their budget amendment or the debate.

Photo: The LGBT flag was flown for LGBT history month for the first time ever on the Town Hall, alongside the Union and St George's flags.